Casa BRUTUS features an interview with Kangawa and his solo exhibition at the Museum of Contemporary Art Tokyo, “EUGENE STUDIO: After the rainbow”.

"Casa BRUTUS" interviews with Eugene Kangawa and features "EUGENE STUDIO After the rainbow," a solo exhibition at the Museum of Contemporary Art Tokyo, which will open in November 2021.

"An exhibition by Eugene Kangawa's EUGENE STUDIO is currently on view at the Museum of Contemporary Art Tokyo. The exhibition includes conceptual paintings, a sculpture that no one will ever be able to see, and a huge ocean installation. The highlights of the exhibition will be introduced with an interview with Eugene Kangawa."

…
“My interpretation of 'After the rainbow' is that it is an 'imaginary sea'. All the oceans on earth have been named, simply put, there are no more new oceans. Therefore, a new ocean is an entity that is not here but only in our imagination" (Eugene Kangawa)…

“I saw the Great Hanshin Earthquake and its reconstruction when I was a child living in the Hanshin area, and experienced 3.11 when I was a university student. Especially after 3.11, I became aware of the reality of the existence of invisible substances (such as radiation), and at the same time, as the use of SNS spread, I think people unconsciously imagined invisible people and communities. And I felt that each problem, including Covid-19, was becoming more apparent. What if there was something I, we, could gain through this decade-long difficult situation? What if there is something we can do to transform the situation, instead of just standing by and watching them as an invisible force? As I kept thinking about all this, what came into view was ‘the power of imagination.’”

"...The exhibition space itself also has Eugene Kangawa's typical attention to detail. The floor tiles in the exhibition space are from the EUGENE STUDIO atelier, and the sofa chair in front of the "Rainbow Painting" series and the museum attendant's chairs were also brought in from his atelier and home. ..."

"...Eugene Kangawa rephrases it with the word 'acceptance'. The changing self, the changing world, and the work as a receptacle for imagination. 'The viewer must have room to enter the work. This ultimately leads to the work facing and illuminating a variety of people. In fact, I think that many of the works in this exhibition easily reflect and reveal the viewer's inner self. Through this exhibition, I am convinced once again that the timing of this exhibition is very important for this day and age, and that it is only through art and exhibitions that we are able to do so.' (Eugene Kangawa)..." 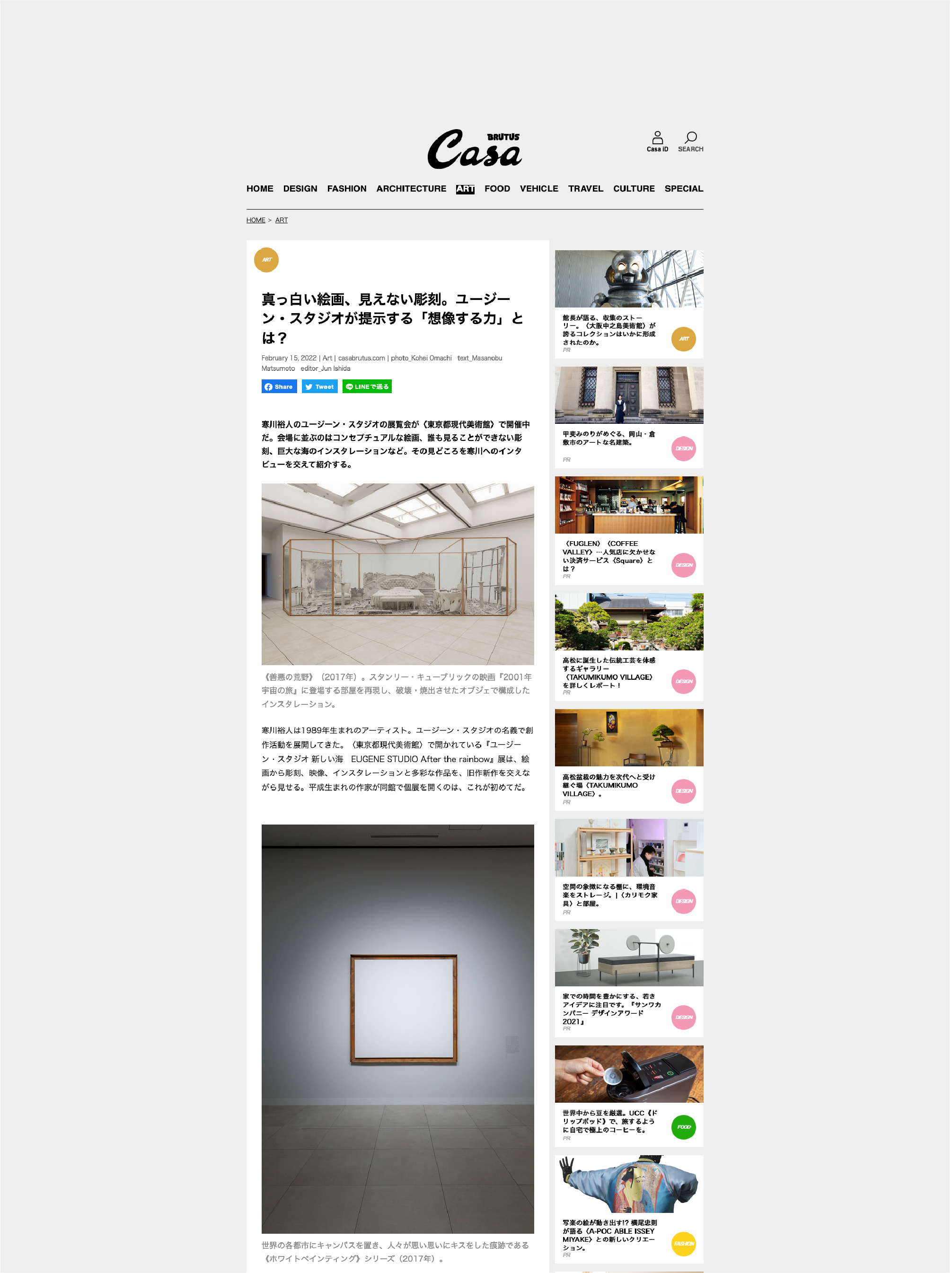