Web taiyo features solo exhibition of EUGENE STUDIO at the Museum of Contemporary Art Tokyo, “EUGENE STUDIO: After the rainbow”.

"Web taiyo" features "EUGENE STUDIO After the rainbow," a solo exhibition at the Museum of Contemporary Art Tokyo, which will open in November 2021.

"Since its opening in 1995, the Museum of Contemporary Art Tokyo has introduced a wide range of contemporary art from Japan and abroad, transcending genres ranging from paintings and sculptures to fashion, architecture, and design. Now, for the first time, the museum is holding a solo exhibition by an artist born in the Heisei era."

…
"...In the year of the fall of the Berlin Wall, Eugene Kangawa was born in the U.S. due to his father's work, later moving to Takarazuka City in Hyogo Prefecture, where the Great Kansai-Awaji Earthquake struck when he was six years old. During his college years, he experienced the death of his mother, who was battling an illness, and the following year, in 2011, the Great East Japan Earthquake struck.
He has captured a wide range of events through his eyes, from world events to personal experiences, including a month-long trip to Europe when he was in elementary school and through his love of encyclopedias and illustrated books.
At the same time, he was interested in politics and sociology, and in this age of artificial intelligence research, he saw the potential in working on "things we don't understand," and chose to become an artist. ..."

A "sea" appears in the atrium space from the second basement floor to the ground floor of the museum. The surroundings are covered with mirrors, and as one walks along the walls, one's own image repeats endlessly along with the surface of the water as it ripples and shakes.
Inspired by the fact that the land where this space exists is below sea level, the work reminds the viewer of the "sea" as a source of life and death, as well as a source of fertility and threat.
The large-scale installation, which allows natural light to enter the space and changes its expression over time, is impressive in terms of both scale and beauty. ..."

"...The infinitely quiet and beautiful space of EUGENE STUDIO's work makes us think about the complexities of "being" in the world.
It is a space of deep contemplation and sorrow, but beyond all dualism, it presents the possibility of hope for the future and the "imagination" for coexistence.
The power to imagine the unseen is the power to advance our understanding of diversity and symbiosis.
This belief may be the reason why he uses the name "STUDIO" rather than an individual name, an artist name that evokes a variety of collaborations. ..." 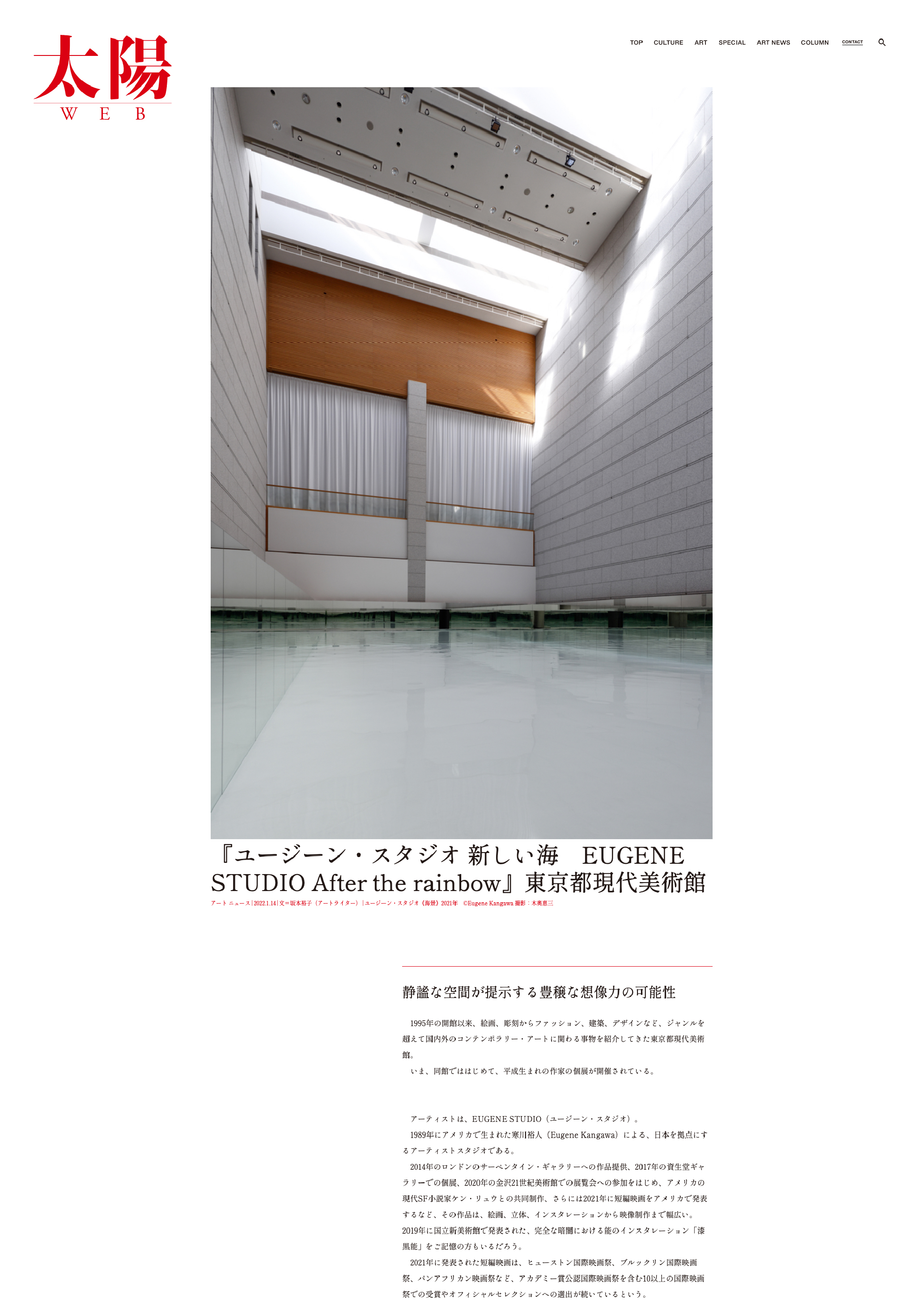