Media & Art Current Contents by Bunka-cho (Agency for Cultural Affairs) features the solo exhibition of EUGENE STUDIO at the Museum of Contemporary Art Tokyo, “EUGENE STUDIO: After the rainbow”.

Media & Art Current Contents by Bunka-cho (Agency for Cultural Affairs) features the solo exhibition of EUGENE STUDIO at the Museum of Contemporary Art Tokyo, “EUGENE STUDIO: After the rainbow”.

Imagine what true symbiosis is.
"EUGENE STUDIO After the rainbow" Exhibition Report

Writer
Monami Morikawa
Curator at Yamanashi Prefectural Museum of Art, born in 1984 in Tokyo. Doctoral degree in the Department of Plastic Arts from Nihon University College of Art. Major projects include "Japan Media Arts Festival: Fuji no Kuni Yamanashi" (2013), "Beauty, Yamanashi, Power! Women Artists in Yamanashi" (2016), among others. She specializes in Western art history and East-West exchange in art. She is interested in marginal art and culture that crosses regions and media.


…
"The exhibition begins with a series of "White Paintings". Nothing is painted on the pure white canvases, but people from various cities around the world have kissed on this surface. When I checked the year of production, I found that the year 2017 was written on the canvas. This series was previously exhibited in the solo exhibition "THE EUGENE Studio 1/2 Century Later." (Nov 21(Tue) - Dec 24(Sun), 2017, Shiseido Gallery, Note 1). The feelings of viewers in front of this work today are likely to be quite different from those of the past. At a time when masks have become the norm and avoiding contact with people is considered a righteous act, this work, made up of overlapping kisses of strangers, reminds us of a "pre-corona" feeling that we have since long forgotten. Since this work is described as "architecture of worship" and "also the smallest architecture" (Note 2), a plate painting of a Russian Orthodox icon, "Our Lady of Kazan," is exhibited in the same corner. Now the existence of the "White Painting" series itself seems to be a miracle that has come to fruition in the midst of the precious everyday life that was built on a delicate balance.

Imagine Symbiosis without Coercion
"What I felt throughout this exhibition was a desire to accept the diverse world as it is, in its entirety. EUGENE STUDIO's work is not loud. They do not condemn or indoctrinate, but rather affirm others who have different ideas, present the fact that diversity exists, and encourage the viewer to imagine what true coexistence is (Note 7). It is a reminder that there are possibilities that only art can offer, without being intrusive. Looking back at the works, we also notice that many of EUGENE STUDIO's works do not have a fixed 'center'. A world without a center and margins, a world where flexible views coexist. This exhibition brings us time to imagine such a world yet to be seen." 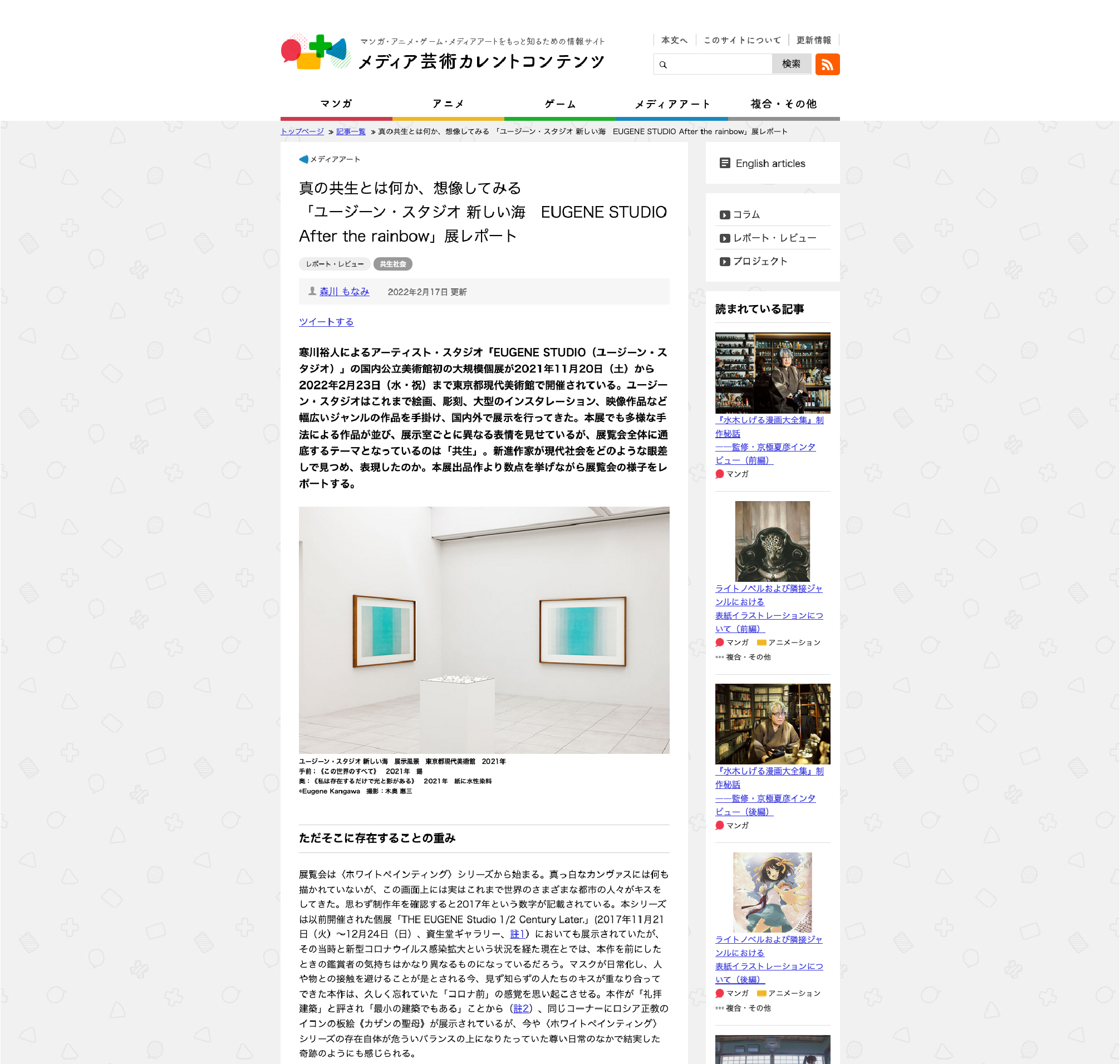